This yearly event is always one of the prestigious contests of the school. All of the departments are in their finest preparations, from picking up every contestant to join, training them and representing their banner. This contest is usually showcasing the intellect, skills and talents of the students in the different events: Oration, Group Storytelling, Binalaybay,  Hiphop Dance, Vocal Solo Pop and Contemporary Dance.

In oration contest, Lea Nikki Gebauer, a BS Biology student, represented the Department of Liberal Arts and Sciences and won 1st place. Ms. Gebauer’s winning piece which was written by her coach, Mr. Sweden Devata, focused on the struggles that she experienced in her life and how she faced it. The piece also included the lessons that she learned from those experiences so as to also impart it to the audience, especially to her fellow students. Her presence and delivery of her piece made the whole department proud. 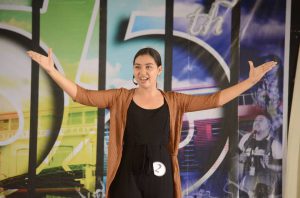 In group storytelling, the team representing LAS is composed of two AB English students whose names are Lovely Carepiano and Winbert Abrenica and two AB Political Science students whose names are Denver Alayon and Michael A. Rivera. Some of the key points that were discussed in the story were about love, perseverance, hard work and creativity of their fellow WITtians. The issue regarding the sudden increase of tuition fee was also tackled.

Thus, it easily caught the attention of the students because the story was about them.

“Good team work yields best result because you are helping each other to become the best, and I think that is more important than just having the goal of winning,” said Lovely Carepiano.

The team also brought the department on top as they won in group storytelling contest. The piece was also written by their coach, Mr. Sweden Devata. 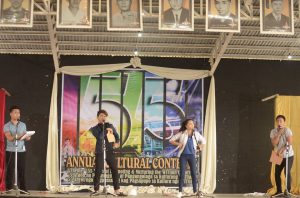 The LAS group storytelling on stage

In binalaybay, John Denver P. Alayon, a fourth year AB Political Science student, from the Department of Liberal Arts and Sciences, was declared as the champion. Among the ten contestants, Denver owned the stage, delivered the piece satisfactorily and proved that he deserved the award. His winning piece “Ang tuod nga WITtian kaangay sang kahoy nga dako- mahanginan, maliso, pero indi gid magduko” (A true WITtian is like a huge tree. It may strike by a strong wind and may turn, but will never bend) was also written by his coach, Mr. Sweden Devata. 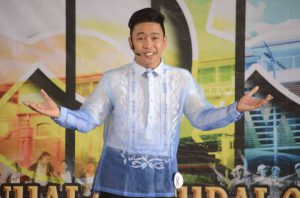 John Denver Alayon on his performance. Photo from WITDio

When he was asked if how he prepared for the contest, Denver said, ”Honestly, during the competition, I was not prepared because I could not even memorize some parts of my speech because of some circumstances that happened before the competition. I only had four days to practice, to master my speech and movements. But because of the trust and support of my trainer and also the motivation of my friends, my classmates, and my family, I overcome those challenges. I was also determined and persistent that time. If you trust and know yourself, then you will succeed”. 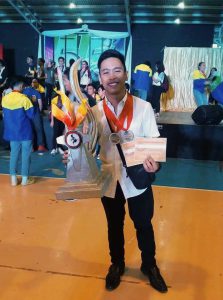 John Denver Alayon with his trophy and certificates.
Photo from WITDio

Christine Joy Lorca, a Grade-12 Senior High School student, represented their department in the Vocal Solo Pop contest. Among all the performances, the song “Rollin” by Tina Turner, performed by Christine Joy won the hearts of the audience and the judges.

“I feel like my confidence to perform and share a unique talent in front of various people has been boosted. Also, I felt overwhelmed and so much gratitude because my hard work was paid off not just because of my talent but because of the help of my loved ones and support of my friends. I really love my talent because for me it is a gift from God that makes me who I am today. All I can say to the other contestants, Nothing worth having come easy. Just do your best. Never give up. Be yourself and dedicate everything to God,” said Christine Joy Lorca. 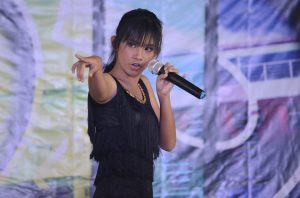 In the Contemporary Dance (Pa de Deux) category, Mae Ann Aquino, BS CompEd 2, and Jaymond Bico, AB English 1, represented the LAS department. The concept of their dance about PWD caught the sympathy of the viewers. They were able to express their unspoken sentiments through their glides, kicks, and other body movements, the reason they won 3rd place. 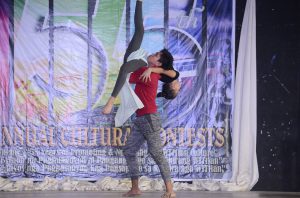 Hiphop contest also mesmerized the audience. The moves and grooves of every team participated really entertained and made the crowd’s noise even louder as they cheer to their teams. Among the astounding performaces, the Senior High School department won in this category. 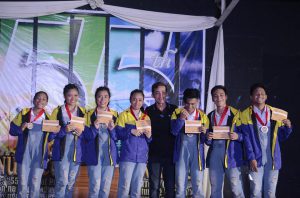 The Senior High School hiphop dancers smiles on a photo as they receive their award. Photo from WITDio