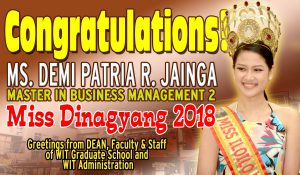 The search for Miss Iloilo Dinagyang is one of the most awaited events that each Ilonggo prepares himself to witness, in the annual celebration of the Iloilo City’s Dinagyang Festival, but what makes it more exciting is this year is the search for the Miss Iloilo Dinagyang “Golden Girl” 2018 in celebration of the 50th Dinagyang Festival here, in the city of love. On January 20, 2018, history has been made as Demi Patria Jainga, 25, a graduating MBM student of Western Institute of Technology was crowned as the Miss Iloilo Dinagyang 2018 at the University of San Agustin Covered Gym. In an interview with her, by the official publication of WIT: The Guild, she was asked what were the qualities and ideals of Western Institute of Technology that she used in her joining in Miss Iloilo Dinagyang, in which she replied, “Yes, huo actually, ina bala ang integrity mo as a person which is kung maging Miss Iloilo Dinagyang ka which is very important gid, kag siyempre ang imo nga knowledge kag imo man nga expertise sa imo nga [profession], I think naggamit ko gd siya [the ideals of W.I.T.] sa pageant.” Also, she was asked what were her messages to her fellow WITtians who might aspire to be or to join Miss Iloilo Dinagyang, in which she answered, “Simple lang, chase your dream, whatever it is. Don’t give up. Even if you feel like giving up, just look for a way, nga mahambal mo sa self mo nga [you] can overcome, and just pray. Everything will just follow.” Once again, another WITian has brought pride and honour to the Home of Learned Men, in the person of Miss Iloilo Dinagyang 2018, Demi Patria Jainga.